Article and pictures from: The Straits Times, 31 August 2008 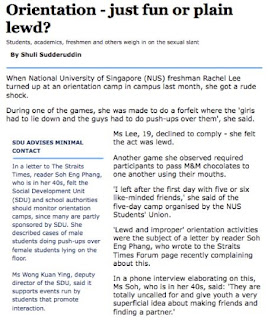 Honestly, when I first read this article, it was nothing new to me because I have experienced this during my days in NUS since I started out as a Freshmen and all through the subsequent 6 years as a Senior. However, since my Freshmen years 8 years ago, I have really seen an "advancement" in how more and more explicit these orientation games or forfeits have become. If this concern or alarm was not raised, we might as well brace ourselves for the days ahead where even secondary school orientations are playing such lewd games!

Check out some of these "games" being played and let this serve as a warning so that you will learn to prepare yourselves and guard yourselves from such lewd acts. 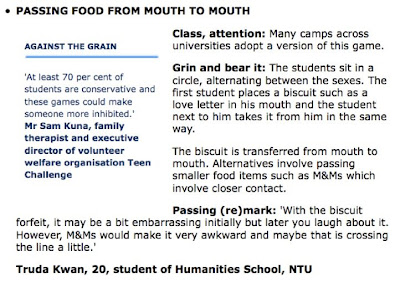 This is an all out 'sabo' game. Usually the toothpick that is given to the freshmen is only half the length of the normal toothpick or even shorter! Using that, you are required to pass polo sweets from one toothpick to another! Secondly, while in the midst of focusing on passing the sweets, some seniors would 'accidentally' bump the two freshmen (typically a guy and girl) so that they would 'accidentally' kiss onto one another!

Typically a forfeit game. The girl would be the 'pole' and then the guy supposedly the dancer. No meaning to this game. In fact I find this very disturbing and degrading for the girl. It seems to be portraying her as the object of sexual desire!

One way I got around this was to dance around the pole instead of doing pole dancing the sexual connotation way. It makes the crowd laugh because it's funny but yet not degrading. 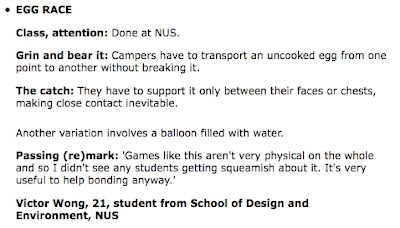 Somehow all these orientation games doesn't seem to like using hands and feet the usual way. It always has to involve face, chest, lips, buttocks...etc. This game probably ends up more dirty than lewd because most of the time the raw egg or water bag would break in between the faces.

This would probably be the most sexually explicit orientation games evolved. Typically makes it look like sexual foreplay. This game sometimes is done with the girl being blindfolded and trying to feel her way to find the cream and lick it off. Gosh! Whoever came up with this game is sick man!

Ok, this game speaks for itself. I don't need to explain it any further.

You know what is upsetting about such lewd games?

1. Most of the games would portray women in a degrading way.

2. It's quite humiliating because most of these games are forfeits. Which means that when two person are performing this forfeit, the entire camp or group are watching and cheering them on!

Honestly, what has become of Orientation? Isn't it supposed to be one where you make a lot of friends, build rapport and teamwork and get adjusted to campus life? Since when has sexual connotative games been a way to achieve these objectives? I strongly believe we can still have fun and building relationships the 'clean' way!

To the girls especially: Do not feel compelled to join in such games. Make a stand and maintain your moral standards. You do have a choice to say NO to such games. It's ok to have fun, but not at the expense of compromising your values and principals.

I totally agree, and I don't want to think what they have done to my bf (now my ex) during the camp....